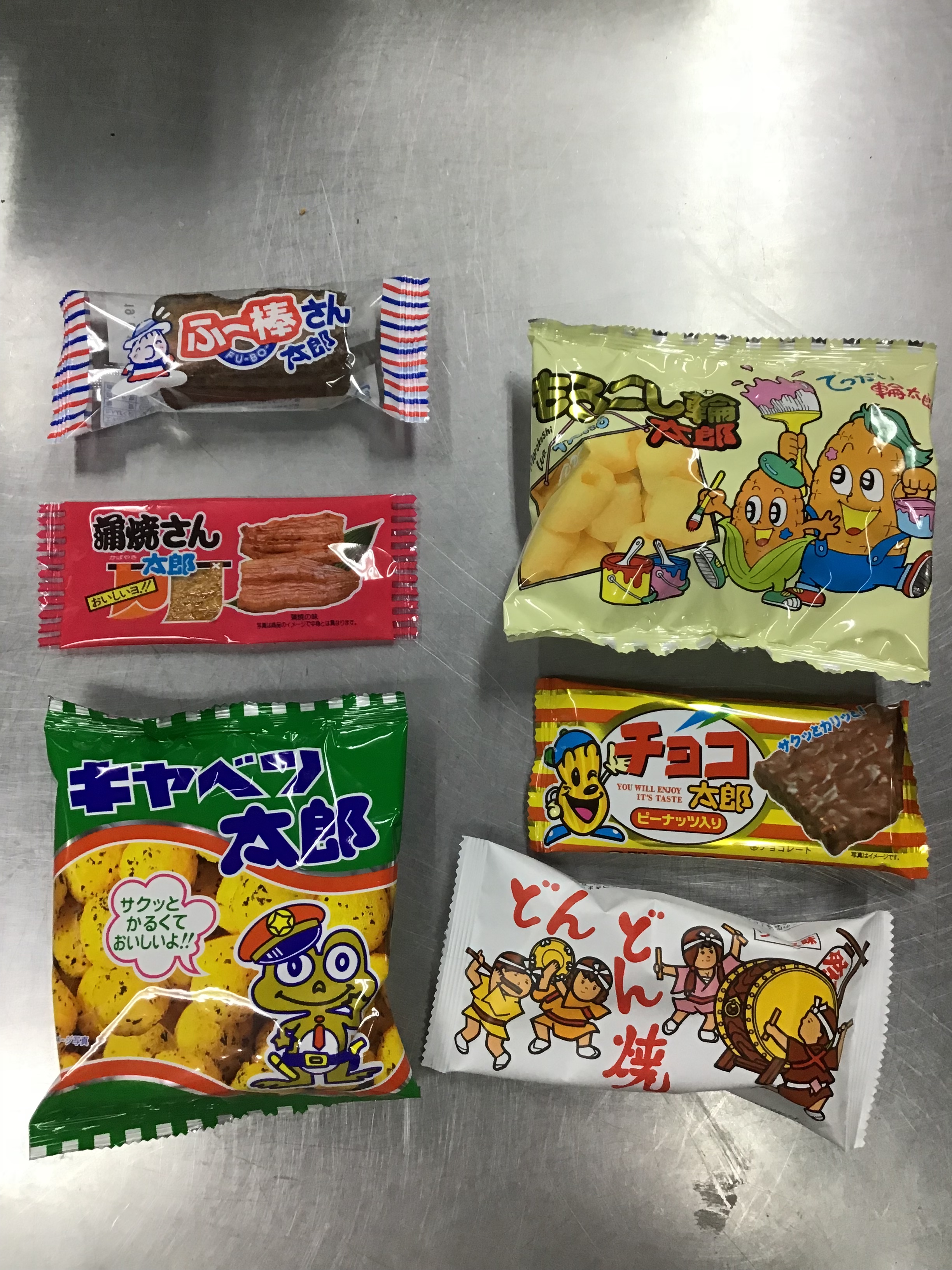 Taro Friends is a group of snack products made by Kado. They are all super cheap snacks, and have interesting flavors, that tend to be very Japanese specific. This bag is “M” sized. So we don’t get to meet all the friends, but still, it’s an interesting package. These snacks are what would be considered “Dagashi” or basically cheap snacks. I think we use the phrase “penny candy” back home. 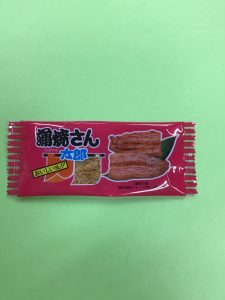 蒲焼さん太郎(Kabayaki  San Taro). A VERY thin cracker that should taste like Unagi! Let’s give it a try! 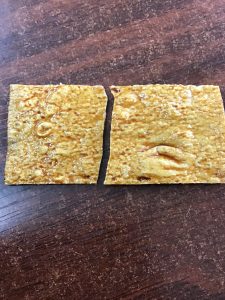 It snapped in half, from a slight breeze coming from another room. That’s how thin this is! But it’s not crunchy. It is chewy, like squid. (It is in fact fish cake) But with a thick layer of Unagi sauce, which is very sticky. So sticky in fact, that the package says it sometimes comes with 2 in a pack! I must say, while this come in a very cool package. It sort of tastes like a stale cracker, that didn’t sell, so someone dipped it in some sauce, and repackaged it. Lol. I can’t tell if it is gross, or good. So odd. Like at first, you say yuck. But than after your done, you tell yourself it wasn’t actually that bad.. 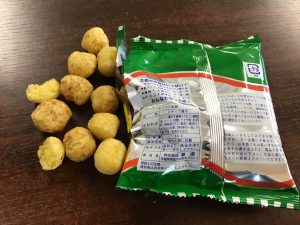 These are kind of cute. They look like little Takayuki balls! They are light, and fluffy. And also crunchy! The flavor is very strong. The taste is like if a cabbage packed okonomoyaki had a love child with a bag of sour cream, and onion Lay’s. I kind of enjoy these. I was only planning on eating 2, or 3 balls, but the bag is now empty! 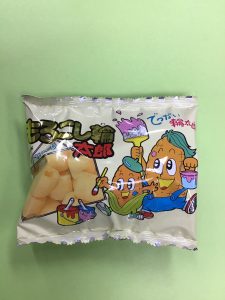 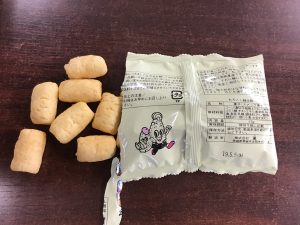 These cylindrical corn puffs have a very, very light flavor. Almost no flavor at first, with a light corn aftertaste. The flavor is supposed to be chicken. The thing that stands out about these is the texture of them. You sort of expect a crunchy snack, but the sort of compress into nothingness. As if you were biting into styrofoam, and as you bit, it turned into dust. Really interesting. I am not sure I would be giving these out to anyone. But a kid may enjoy them. 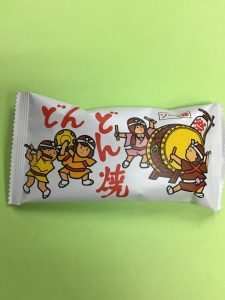 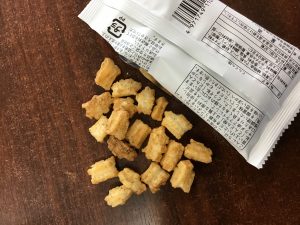 Don don is the sound of a beating drum, or knocking, or pounding something. Yakisoba means grilled. And.. Woah! These little suckers pack a flavor punch in them! Smaller than my fingernail, but just packed with flavor!! All of these snacks seems to be going with a sauce flavor. And these little guys feel like they came from a packet of instant Yakisoba powder. That is the flavor for sure. They are very crunchy, but they seem to dissolve quickly. After like 4 chews, they have evaporated into nothing! Interesting. Great for kids, but also would be good with a cola, or a beer. In fact, they might make interesting croutons in the right salad. It’s a strangely accurate depiction of hitting a taiko drum, because each chop feels like your molars are beating their own little taiko drum in your mouth. 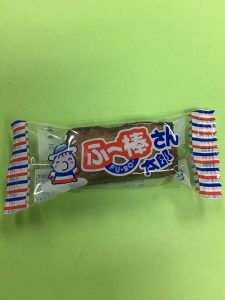 I have to admit, I was really looking forward to this! It looks like a common snack in my area. A donut made with Okinawa Black Sugar. They are super tasty! Will this be the same?! The outside does have that same black sugar taste, but the inside is way diffferent than a doughnut. It is actually like cotton candy! Crazy. I think the best way to describe this, is cotton candy dipped in molten black sugar. No bad. 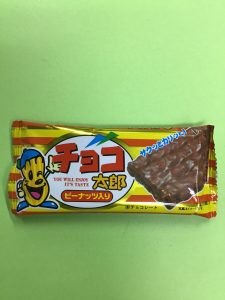 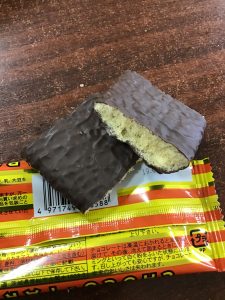 Gotta save the choco for last right? Right! And the inside comes as a surprise. I thought it would be more of a cereal type bar, but it is like an umai bo. Just about as cheap of a filling as you can get. But it tastes fine. A chocolate covered puff bar. Nothing really special here, but not horrible. I did not taste any peanut in this, but apparently there is. It claims so on the package. I smell a conspiracy!

So what is the final takeaway from this set. Is it really a good deal? Well, no. I can actually buy all these individually, and save a few pennies. But I mean 99yen is so cheap, that I’m not really able to be upset about anything here. I would not recommend eating the whole bad in one sitting like I did though. In fact I would strongly recommend not doing that. I felt like I did more than 99yen worth of damage to my insides. About 15 minutes after finishing my thought felt as if I had been scrubbing it with glass wool. Like a razor burn on your tounge! But it was worth it, to get this review out to the world. I suppose it was pretty fun trying out all these flavors, even though most were “sauce” flavor. I’m torn on if it would make a good gift. I think people would love to receive this, but not be too happy with the actual product.  What do you guys think?