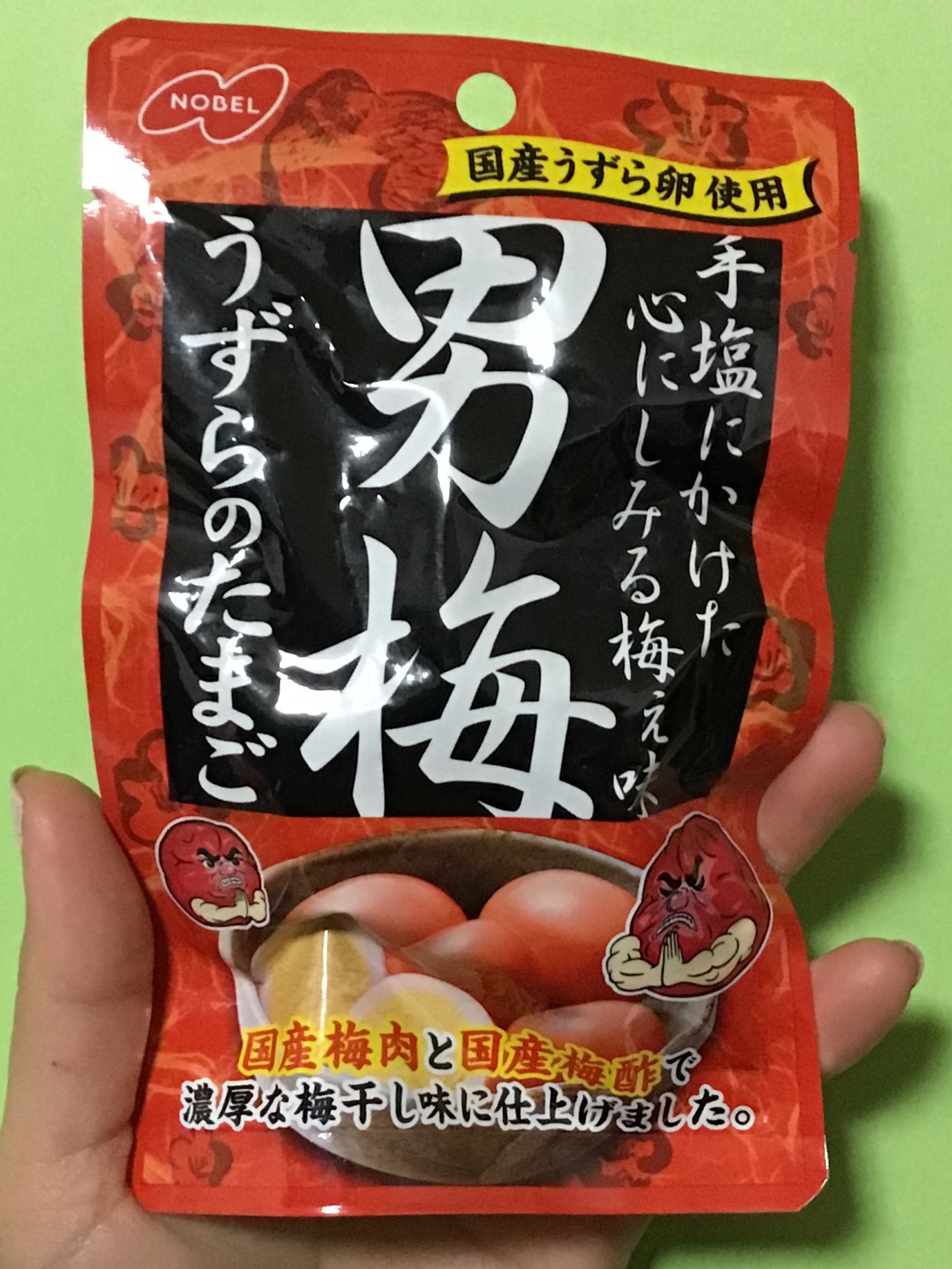 Man, oh man did I kill that title. But it is what is. Nobel is bringing us 男梅, or Otoko Ume. Otoko meaning Male, and Ume being the pickled sour plum that is so popular in Japan. A better translation would be “The manly Ume-Egg.” But I digress, and let’s look into this product a little more before I dive in!

So, this one sort of stood out to me on the shelf. It had that “what in the world is this?!” factor, as well as a crazy sour plum man with arms! So I had to try it! While the name in Man Plum, you can see by the picture, the product is boiled eggs. The writing on the side informs us that these are quail eggs. うずら being quail, and たまご being egg.

So we have boiled quail eggs, that have been pickled in a sour plum base of some sort. As the name suggests, Japanese sour plums are indeed sour. Most commonly added on top of a bowl of rice, and kind of mushed into it for some flavor.

I was not a fan at all of sour plums before moving to Japan!! But they start to grow on you over time. I am a fan of boiled eggs though, so this should be fun!

After opening the pack, this is how they came out. I cut one in half so you could see how the product matches up with the pic!

Much “browner” than the picture would have you believe. But who puts their faith in a products cover image?! Let’s taste this, and make our own decision!!

Oh boy… This. Is. Fantastic!

The egg is cooked in such a manner that it almost has a springy hardened to it, yet crumbles apart after the first bite. Surely better than any hard boiled egg I have ever cooked myself. The pickled sour plum adds a brilliant flavor to what would be an otherwise uneventful experience. This is the sort of thing you would use on someone who was an anti-Ume proselytizer. Just shove an egg under their nose, and ask them, “Is this not an amazing Ume based product?!”

Final verdict… This is a hard one for me. This is a gift I would give to anyone! But the gift is coming from me.. I could imagine this going bad for someone else that is not as big on experiencing new flavors, and sharing their findings with the world..

In the end, I think this is a product that everyone should at least try. If you don’t like it, than that is fine. It’s not the end of the world, and you’ll likely not puke or anything. But if you do like it, it will blow your mind. And that makes it priceless to me!

Cant wait to hear in the comments what you think of this!!