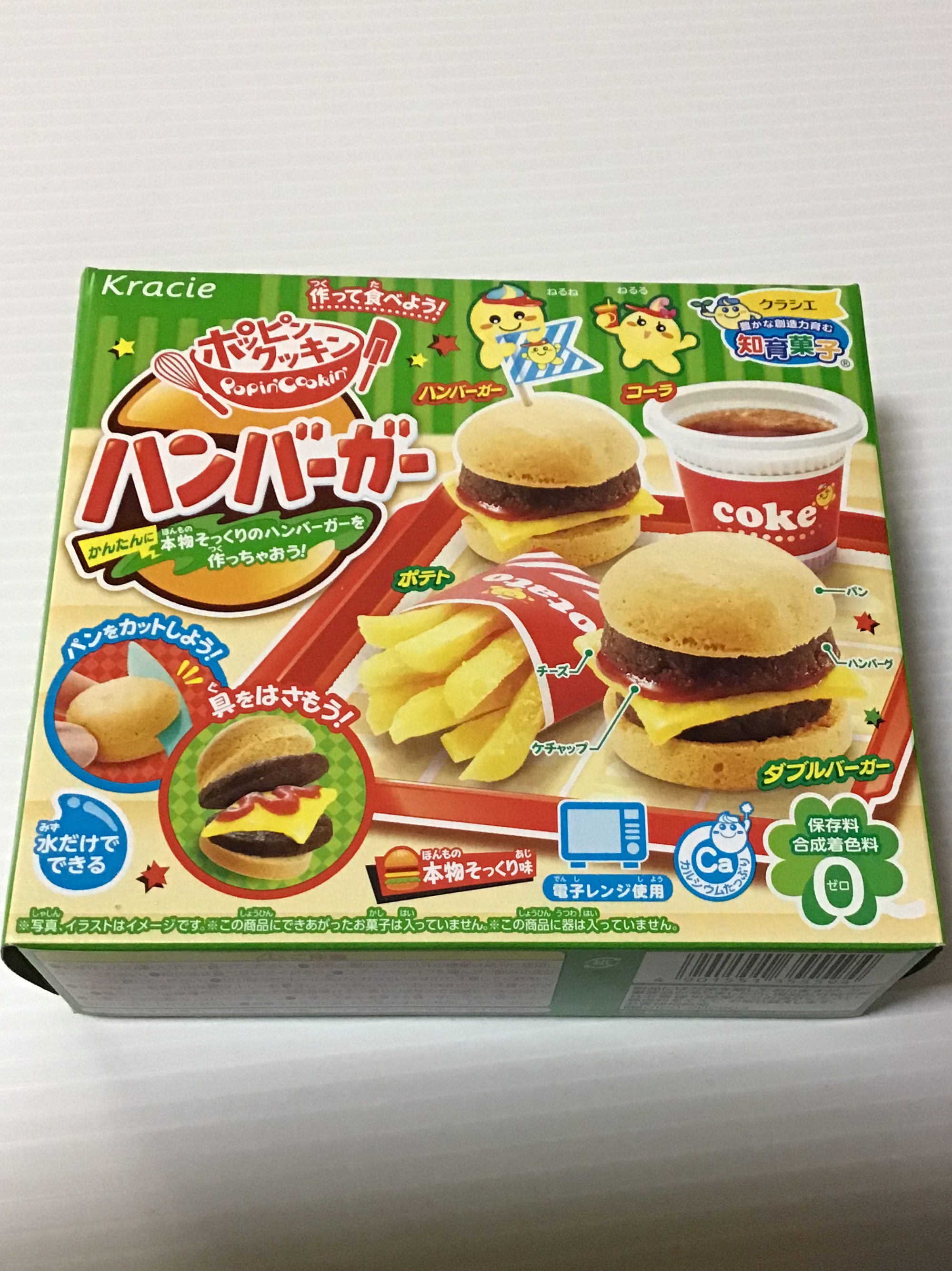 Today we are going to walk you through a DIY Hamburger Kit from Kracie. I have to admit, I always finding myself rush through these things, and the final product never looks like the picture on the box. Sometimes these DIY kits leave me wondering how a child under 5 can even do this by themselves.

Well this Kit was different. It was fairly easy, despite being more complicated than other kits (i.e. you need a microwave.) And best of all, the final product looked somewhat like the picture on the box! AND it was made by a 5 year old!! Although I didn’t get to eat the whole thing, my child did let me snag a few bites, and I was rather impressed by the flavor. Expecting sweet, and sugary. The final product really does taste like a burger, and fries! So let’s get started, and take a look at this Kit. First I will need to let you know what you will need before starting this Kit on your own.

What you will need:

– Water (we used a small cup, and it was more than enough.)

Thats it! Now let’s take a closer look at the back of the box. 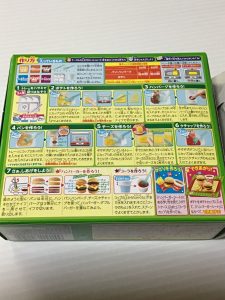 As you can see, the back gives you a pretty good idea of how to make everything. Even without being able to read Japanese, you have enough info in the pictures to give you an overall idea of how this works. Of course we will still tell you what all of it means. Now let’s take a look at the contents of the package. 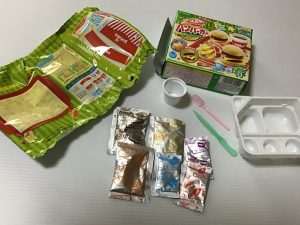 What’s new besides the box we had previously seen? We have the wrapper the contents came in. And make sure you don’t just rip the bag open because there are parts of it you need to cut out, and use in your DIY kit. We have a plastic cup for the cola. A spoon, and knife for mixing, and cutting. Several trays for making the contents in. And 6 powder packets that provide us with the ingredients to make everything. Now let’s move on to step 1 on the back of the box.

Step 1 is very simple. Just cut the plastic trays into 4 separate trays. The one with 3 round trays will be used for the burger, and buns. The square-ish one, and triangle-ish one will be used for mixing, and the small triangle one will be our water “cup”. Here is what they look like once you cut them. 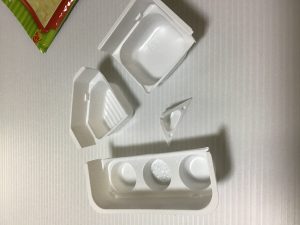 Now it’s time to make the French fries! You will need the triangle shaped tray, and the packet with the yellow “ポテト” text. 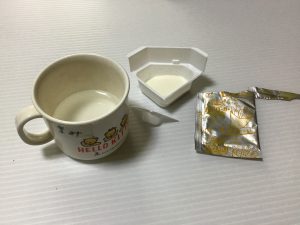 Mix the powder from the packet with 2 “cups” of water, and give it a good stir with the little spoon that was included with the Kit. Once you have stirred it, and have a good consistency, use your finger to press the mix down, in a nice, even press. Next you will need to microwave it for 30-40 seconds depending on your microwave. The box recommends 30 sec. at 500 watts, and 40 sec. for 600 watts. Once it has cooled off, use the included knife, and slice the mix into fry shaped slices. 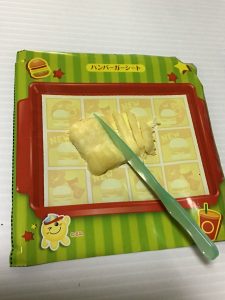 And voila! Next, we are onto the burger! 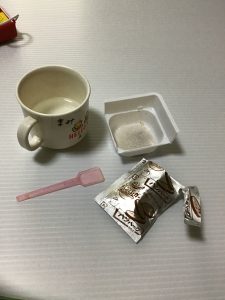 To start, let’s make the patty. Mix the contents of the package into the square shaped tray, with 2 “cups” of water. Once you have mixed it thoroughly, press the mix into the center circle. Give the tray a quick rinse (if you wish to) and than stir in the buns packet. 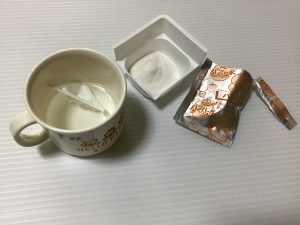 Again, we will mix the contents of the buns packet with 2 “cups” of water. Once mixed, add that to the remaining 2 circles in the tray. Half of the mix in each circle. You are than going to microwave that. Microwave for 30-40 seconds, same as you did with the fries. The container should look something like this before you microwave it. 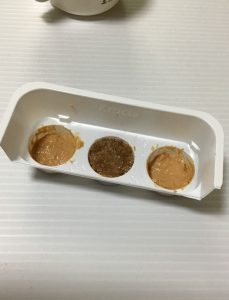 Pretty crude you might think, and I agree. Clean up the buns a bit if you can, or you can always trim it up after it bakes. Which is what I did. Here is what my buns, and patty looked like after cooking. 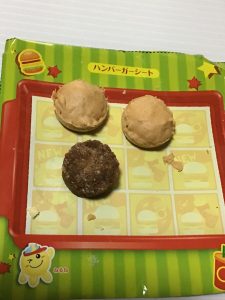 But anyhow, we are going to let those sit, and move onto the next step, the cheese! For this you will need to grab your triangle shaped tray, and the packet with the blue “チーズ” text. 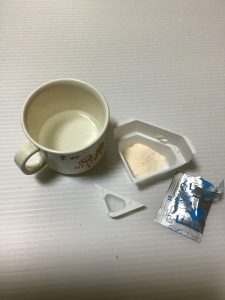 Mix the contents of the packet with 1 “cup” of water. Once mixed, roll the mixture into a ball, and place it onto the plastic wrapper. There is a specific section for this. 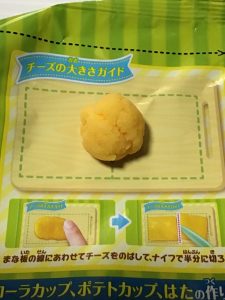 As you can see, you will need to press the cheese ball flat with your fingers, and cut it into 2 cheese squares. Once you’ve done that, set the squares aside, with your buns, and patty, and move onto the next step. The ketchup!

For the ketchup, you will need the packet with the red “ケチャップ” text. And mix that with 2 “cups” of water in the triangle shaped tray. Once finished, set it aside, and get ready to assemble your burgers! 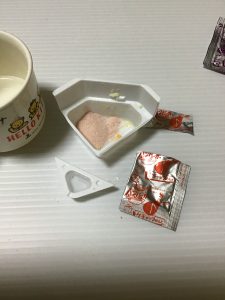 Now we need to cut the buns, and patty. With the included knife, cut each bun in half. And cut the patty into 3 small patties. This will give you one double cheese burger, and a single. And should look something like this.. 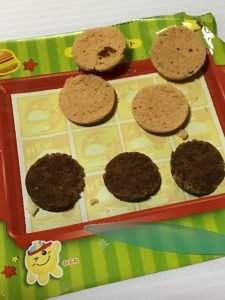 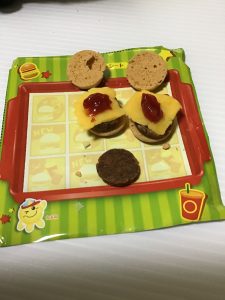 Next, we will want to make the packaging for the cola, and fries. (I forgot to do the flag toothpick, but if you have the pick, than do that too!) All you need to do is cut out the pieces from the wrapper, and tape them like so. Any tape will do. 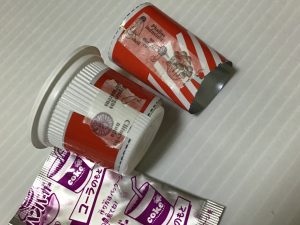 Now, it’s time to get fizzy! Let’s make some cola. Add water into the cup, leaving 1cm of space between the water line, and the rim of the cup. Add in the packet with the purple “コーラ”  text, and stir it in. You now have cola! 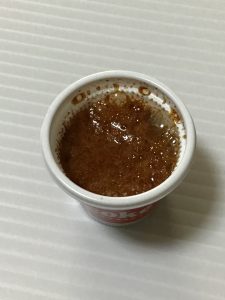 Put your fries into the newly made package, and set it all up! You’ve done it! Take a pic, and share it with whomever you like! Also, share it with me, as I would love to see how yours turned out!! 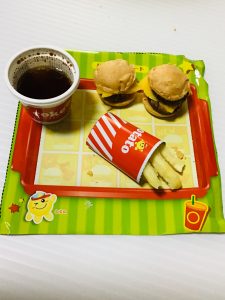